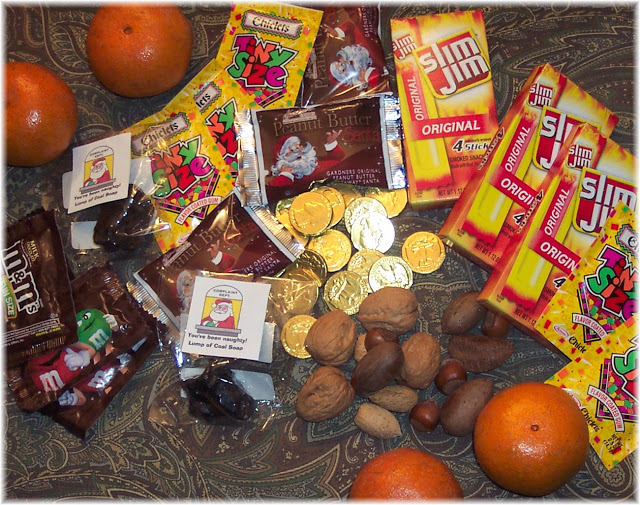 The celebration of St. Nicholas Day is a tradition in our home.  Whenever we have a "new" child enter our family, I like to introduce them this old world custom.  This year, it is Christie's nephews Zach & Quinn and Jennifer's sons Luca & Niko.  They will receive a care package delivered just in time for December 6th. 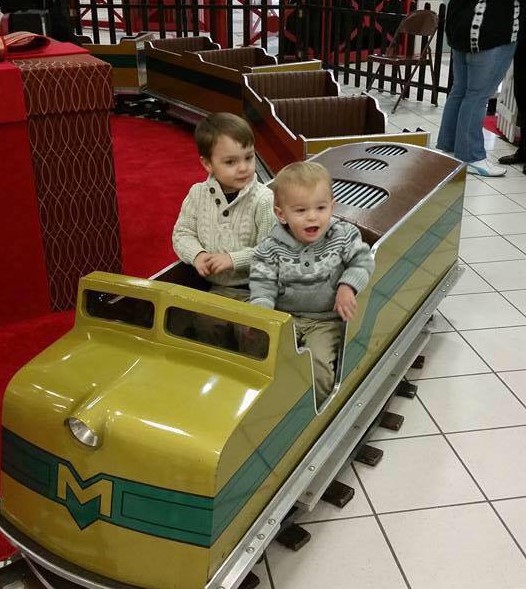 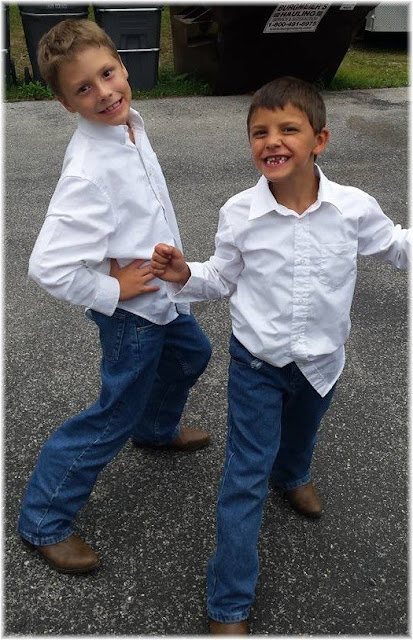 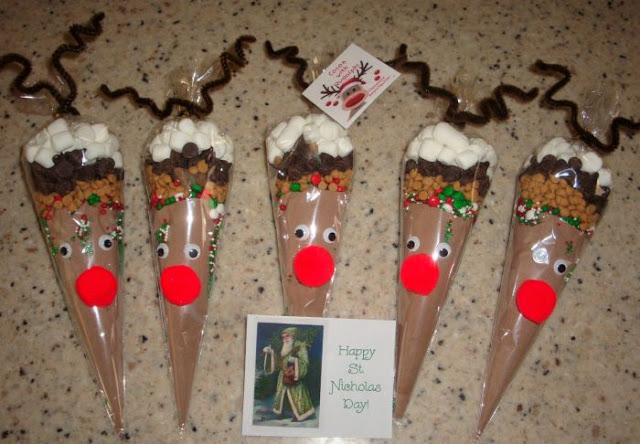 I wanted to share you with the story of St. Nicholas.  December 6th is St. Nicholas Day.  Every year, children around the world celebrate this special day in honor of a great man – St. Nicholas. 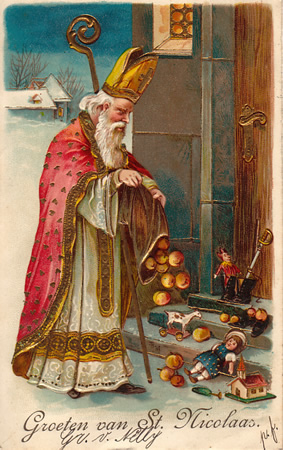 Now, I am sure you are familiar with the magical fellow known as Santa Claus.  Listen to the story of St. Nicholas and see if it sounds familiar to you.

Nicholas was just a young boy when his father died.  His father was rich so Nicholas had a lot of money.  He went to live with his Uncle.  He was a very kind person who always tried to help people.

He lived in a country called .  There were many very poor people in his village.  He didn’t like having money when others were in need so he would secretly help them.  There was a family so poor they were going to have to become slaves because they didn’t even have money to buy food.  Nicholas heard about them and decided to help.  The girls would wash their socks at night and hang them by the fire to dry.  Nicholas secretly dropped gold coins into the socks and saved the family.

He did not want people to know so he did this in secret.  As time went on, he continued to help wherever he would see a need. 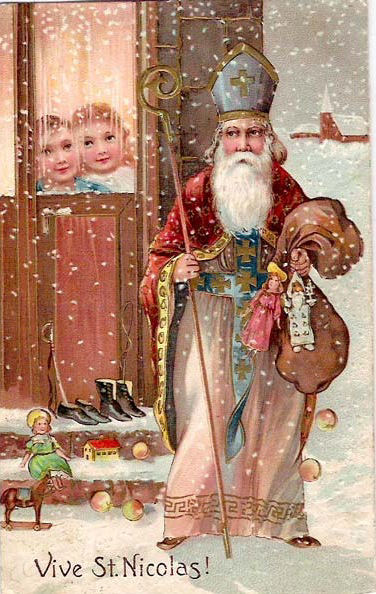 He started helping all of the poor people in the village.  He especially liked helping children.  Many were hungry with little food.  Children would leave their shoes outside their doors at night.  Nicholas would sneak in and fill their shoes with special treats.  He often gave fruit and nuts, sweet treats and gold coins. When he couldn’t get into the house, he would drop the gifts down the chimney. 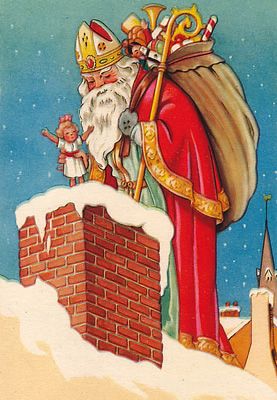 He kept book about the children’s behavior and carried it with him where ever he went.  When he knew a child was being unkind or getting into trouble, he would leave them a bundle of switches or a lump of coal instead of treats in hopes that they would change their ways from bad to good.

He had a long white beard and because he was a Bishop, he wore a red cape.  Does that sound like anyone you know about?  Yes, indeed, St. Nicholas – who was a very real, compassionate gentleman – became the legend we all know as Santa Claus! White Beard, , Naughty and Nice list, presents, gifts in stockings, chimney, lump of coal and all!  He didn’t have reindeer but he rode around on a white horse.  Now, Nicholas didn’t have any magical powers like Santa because he was just an ordinary person just like us, but he always was so very kind and generous to everyone he met. We, too, can be inspired by his good works and always strive to help those who are less fortunate than us. 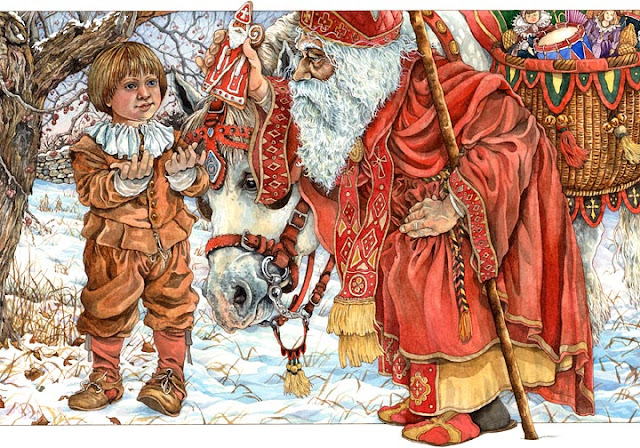 When Uncle Rob and his brothers were little, they always found their shoes filled with treats on the night of December 6th.  Even today, they are grown men, they still get a pack of Chiclets, beef jerky, chocolate coins and a peanut butter melt away Santa on St Nicholas Day.   Uncle Rob even got them as a special care package when he was overseas with the Marines.  Nicholas never forgets anyone! 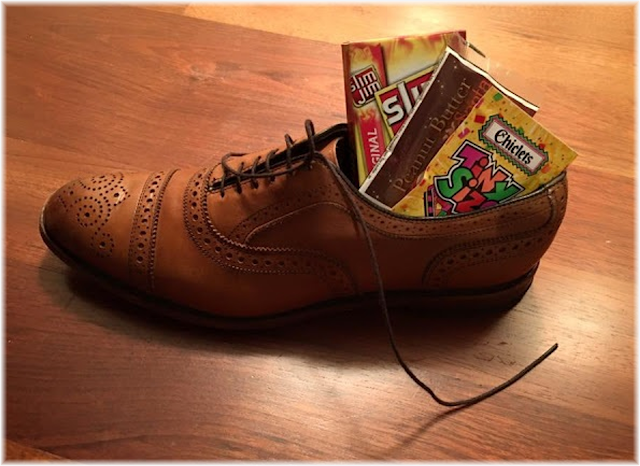 I wanted to share some special treats with you on this St. Nicholas day.  I hope you enjoy them.  Remember to always be good and kind – especially to others who need your help – just like St. Nick and Santa, too.

Have a happy holiday! 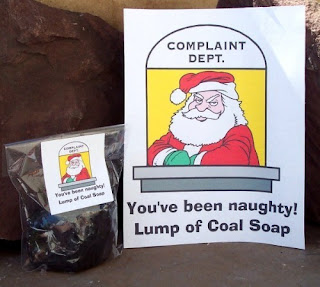 Line 8" X 8" baking pan with aluminum foil allowing foil to overhang sides. Spray with non-stick cooking spray. I have silicone lump of coal molds that can be used if you have them, if not just use the pan and break it up after it hardens.

In a 2-quart heavy bottom saucepan, mix together sugar, corn syrup, water . Stir over medium heat until sugar dissolves. Insert candy thermometer if using, making certain it does not touch the bottom of the pan.

Bring mixture to a boil, without stirring. At the start you can "wash down" any sugar crystals that form on the sides of the pan with a wet pastry brush. Just do this once early on.


Continue to cook and remove from heat at 300º F or until drops of syrup form hard, brittle threads in cold water. When it stops boiling, add flavor and stir.  Be careful, it is very hot and will steam up when you add the flavor.

Pour syrup into prepared pan. Cool completely on counter, don’t put in the refrigerator. Once candy is cooled, lift from pan and remove foil.

Break candy into small chunks to simulate coal pieces.  I put it in a heavy zip lock bag and hit it with a mallet.  Store in air tight container.   Enjoy! 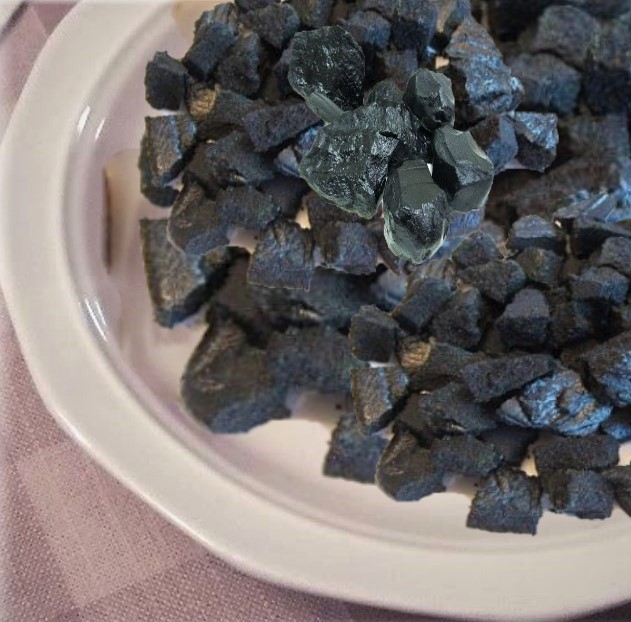 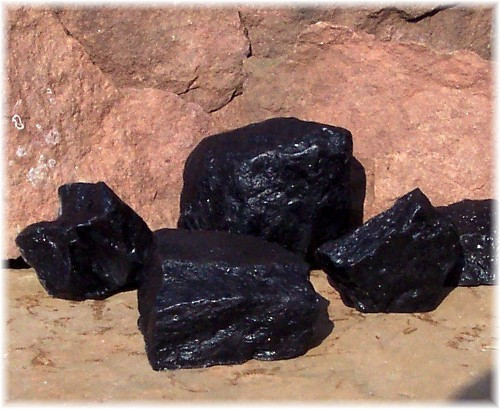 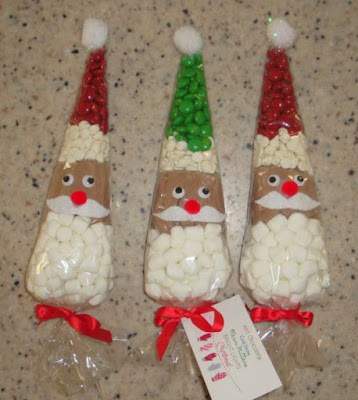