I have been spending some time scanning in some old family photos hoping to preserve them as digital files.  They have just been thrown into boxes and are deteriorating quickly.  Some are from the very early 1900's.

Link to on line album

I came across some of my Dad's information on his service in World War II where he was a POW, injured and taken prisoner on the first day of the Battle of the Bulge. 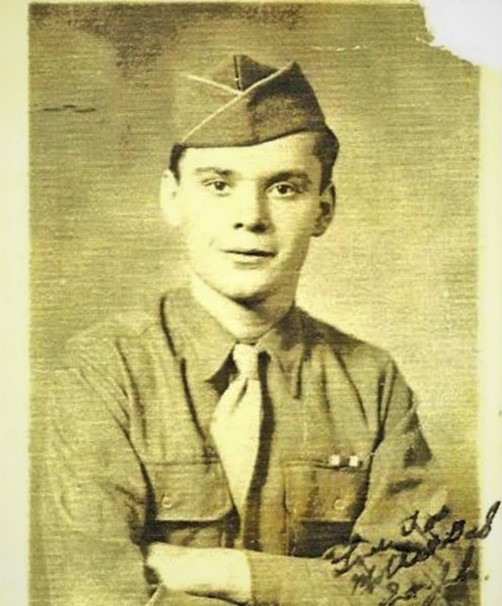 
Here is the notification my Grandmother received.  It is just a small roughly torn 4 X 4 inch scrap of paper, typed with a manual typewriter and signed by someone that I assume is a secretary.  This is in an envelope that was from a letter Grandma sent to my Dad.  It was post marked Nov 19, 1944, Coupon, PA. It was returned to her stamped "Missing January 24, 1945"  I think they may have actually used this envelope to send the notice.  I realize there were great shortages at that time and the numbers of missing and killed were overwhelming but it amazes me how little care was involved in this process. 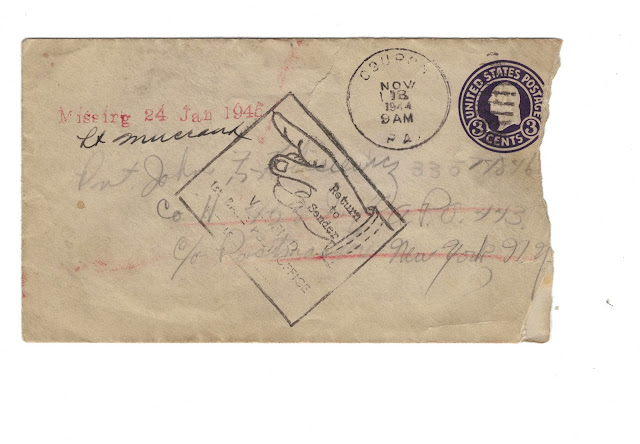 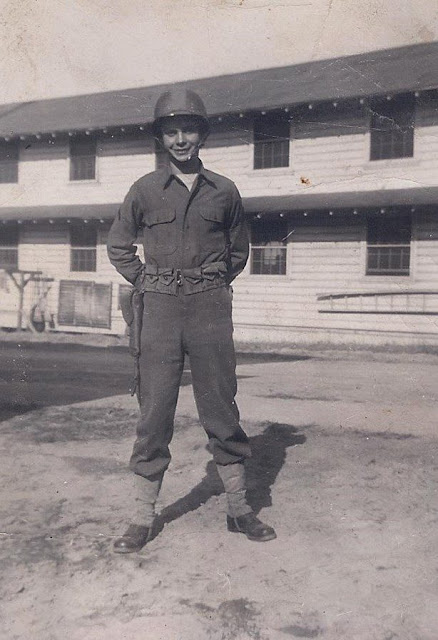 John Klisiewicz WW!! US Army , the back reads "This is the gun we are using now. Automatic 45 "

He served in the US Army, Company H 422 Infantry, 106th Division as a "Heavy Mortar Gunner."  I remember him telling us he used a "bazooka" in battle.   He was drafted March 5th, 1943 and went to Ft. Jackson, SC.  Jan 19th, 1944 he left SC and went to Tennessee for maneuvers.  He left Tenn. for Camp Atterbury, IN on March 27th 1944 then to Camp Miles Standish until Sept 20, 1944. Departed for Europe from NY Harbor on Sept 21st. on the Acquatania.  He arrived in Scotland on Sept 28th and went to Camp Attlestrop England.  Left there Oct 7th, 1944 on the Langaby Castle to the battlefields of Ardennes region of Wallonia in Belgium, France, and Luxembourg on the Western Front.


After that, I don't have detailed records except he was listed as missing in action on Dec. 16,1944 which is the date of the start of the Battle of the Bulge. From the history of his division, it looks like he was injured (an 88 mm shell hit his mortar pit and caused wounds to his leg) and taken prisoner at the Battle of the Bulge.  Here is  an article I found with information that matches the dates of his official records, They were called the "Golden Lions" because of the patch they wore on their uniforms: 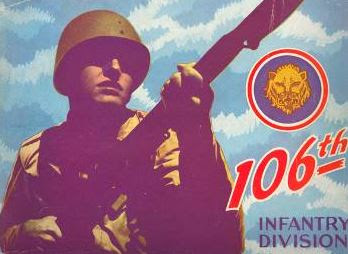 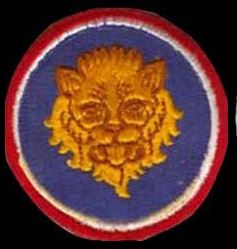 Against this backdrop, the 106thInfantry Division arrived on the continent the first week of December. After disembarking at , their arduous trek began. They eventually made their way to the Schnee Eifel region of the , a rugged, hilly region in the tri-border area of , and . The area had a Christmas card look with its narrow winding roads, and mist-shrouded, snowy hills, interspersed with dense forests of fir and pine. The locals in their area, mostly of German descent with a sprinkling of French speaking and Flemish Belgians, were indifferent at best. The ethnic mix brought on overlapping loyalties during the war.
It was supposed to be an easy start for the green troops. The was reported to be sparsely defended by enemy units made up of old men and others ill-suited for combat. The Division’s area of responsibility covered over twenty miles, well beyond what Army regulations stated for a division. Two thirds of the division would be located inside the German border. Despite this fact, the men of the 2ndInfantry Division, whom they were replacing, joked that the new guys were going to have it easy.
But before the men had even settled in, they were exhausted, with dozens already sick. Within a few days, trench foot would become a problem.Traveling to the front had been a cold and miserable journey. A driving rain fell. Ice and mud impeded the drive. And it was not without incident; there had been one casualty from a weather-related traffic accident. Warrant Officer Claude Collins of the 590th Field Artillery was hit by a truck and killed. Reaching the Schnee Eifel was a relief. Many of the men were billeted in farmhouses or log cabins that had been built by the previous GIs. Captured German bunkers also provided shelter. Even with the cold and snow, morale was high. By 1700 on the evening of December 9, 1944, registration by the artillery battalions was complete. Some batteries even fired a few harassing rounds at the enemy, which was part of a regular program of unobserved fire missions started by the 2nd Infantry Division.
The first few days were routine for the men. Patrols were sent out. Artillery batteries had a few more fire missions, mostly unobserved due to the weather. The enemy shot a few flares and lobbed some shells that missed. That was about it. There were some mishaps: fires broke out at a company kitchen and one of the regimental command posts; most likely due to carelessness rather than any enemy sabotage. Strangely, it elicited no fire from the enemy. Rumors ran rampant about Germans infiltrating at night. Engine noise coming from the German side of the line increased each day, which added to their general unease. As the days passed, the whistle of steam locomotives across the was heard with increasing frequency. At Corps HQ, no one appeared concerned even after German recon planes were heard flying over their positions. Any concerns sent up the intelligence chain by the 106th were chalked up to nerves by the VIII Corps G-2. The reports were met with much derision by the Corps intelligence staff who scoffed at the new arrivals’ reports. They told the 106th’s infantry units that the Germans were playing recorded sounds of tanks and other vehicles to scare the new men.
The sounds were all too real. Hitler had three armies massing in the Ardennes: the newly formed Sixth SS Panzer Army in the north, led by Hitler’s close confidant, General Sepp Dietrich, which had almost 500 tanks and self-propelled guns; the Fifth Panzer Army, headed by General Hasso von Manteuffel; and furthest south, the Seventh Army, made up of mostly infantry units. These combined Armies contained almost 30 infantry divisions and 12 Panzer divisions. The goal was to split the Allied armies, and retake . The Fifth Panzer was given the job of cutting through the long, thin front held by the 106th in the St. Vith sector.

Flares and spotlights lit up the early morning sky at 0530 on the morning of December 16, 1944. Within minutes, the shells began to fall. The terrifying sound of artillery shells and nebelwuerfers shattered the morning calm. The artillery battalions were hit first. Even St. Vith, almost 7 miles from the border, was being hit. Confused GIs at the furthest outposts tried to call their HQs. But the lines were out. Even those who got through did not get any orders. Nobody knew anything. Despite a lull in the artillery fire two hours later, the men were now keenly aware that this was more than a spoiling attack. By late on the night of the 16th, many of the Corps artillery units were ordered out while the 106th desperately hung on. The 422nd & 423rd Infantry kept a foothold in the key into the next morning. It didn’t last. A big push at dawn overran the defenders. Enemy armor was now making its way towards Schonberg virtually unopposed. Trapping two thirds of the Division on the Schnee Eifel was a real possibility. The bad weather made air support impossible. So the Germans could use the road network with impunity.


Poor communication between the infantry regiments and St. Vith led to even more confusion over what exactly to do. The 422nd and 423rd were being bypassed. Many in the 422nd had not even fired a shot yet. All hope lay in stopping the Germans at Schonberg, with its heavy stone bridge across the Our river. By midday on December 17th it was too late. The village was taken and the Germans now threatened St. Vith. Several small groups did get out over the next few days. Some fought their way right past the Germans in the village. Others made a break for the forest, and trekked to freedom in deep snow. The last known men to escape encirclement were from the 423rd's I & R platoon. Lt. Ivan Long led the small contingent across the Our River, past the German sentries and got to St. Vith, where he informed Division HQ of the mass surrender. It was a temporary reprieve. The men were thrown into the line to help defend St. Vith within hours.
This photo shows members of the 106th being taken prisoners. 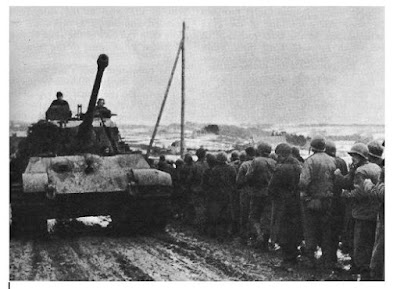 My Dad didn't talk much about this time.  But I know he had been injured.  He spoke about the harsh conditions in the POW camp - freezing conditions, very little food because the Germans needed it all for their army.  He talked about them opening the doors once a day and dumping food or just potato peelings on the dirt floors, that was their dinner.

He also kept a small silver pistol.  The story went that he had taken it from the body of a German soldier. He hid it in his boot and kept it there while he was a POW, they never found it.  He didn't have any bullets but he did have the gun.  My Mom kept all of these things in the top drawer of their wardrobe - the gun, the book, the photos and letters.  She would let us look a them every once in a while.

After he was rescued/released from the POW camp, he spend several months in a hospital in France before returning to the US.  He was honorably discharged December 6, 1945 from Camp Joseph T. Robinson, Arkansas. 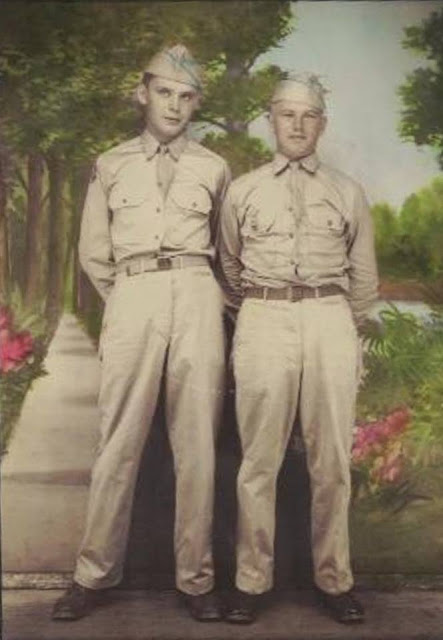 My Dad with his childhood friend Clare Urbanek Coupon PA 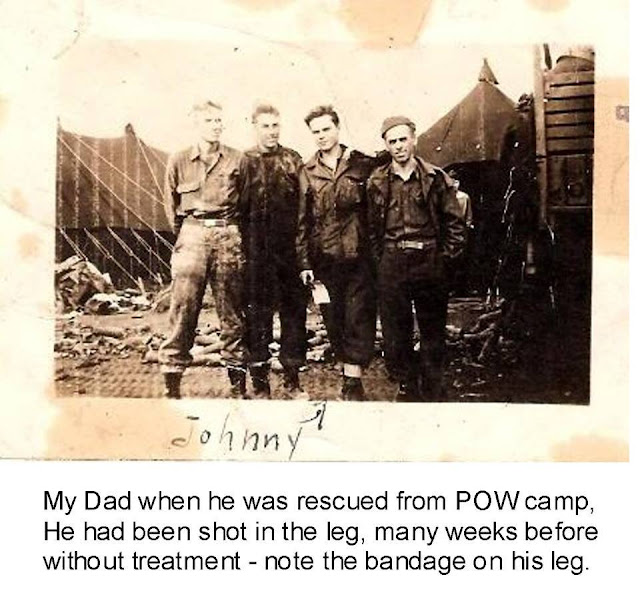 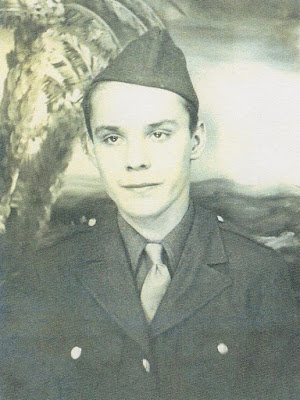 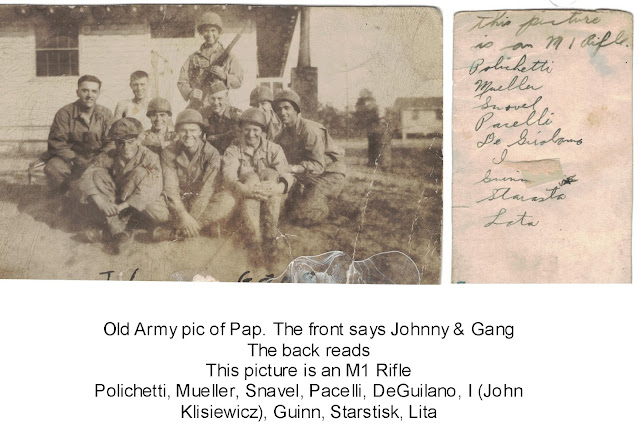 St. Joseph Catholic Church in Coupon - Hero Booklet.  My Dad and his two brothers are listed as are many of my other Uncles-in-law and many fathers of my childhood friends from Gallitzin/Coupon/Altoona area..  I grew up in our town's Polish neighborhood so lots of my Mom's and Dad's friends and neighbors were together for their entire lives and shared generations of families as neighbors. 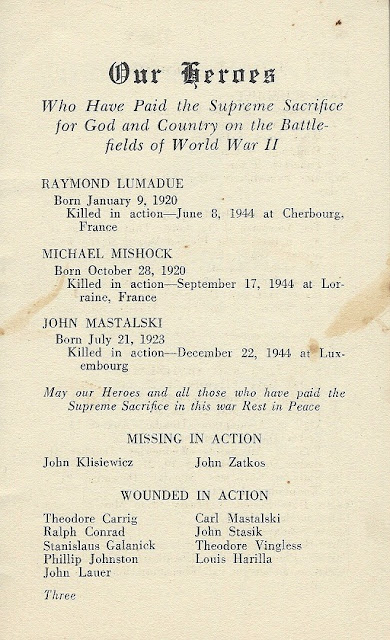 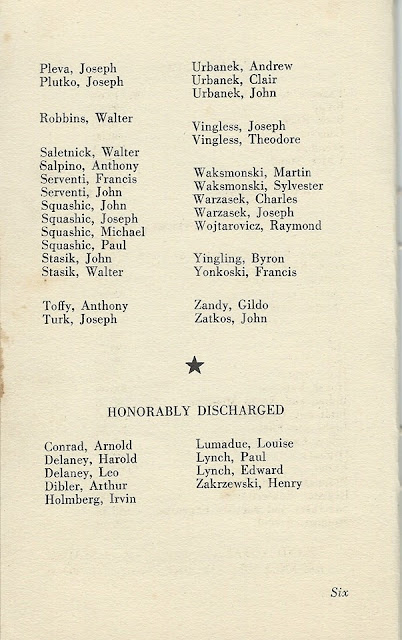 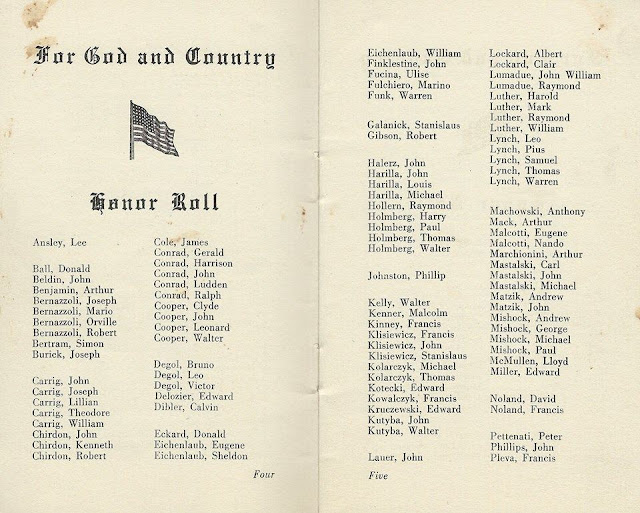 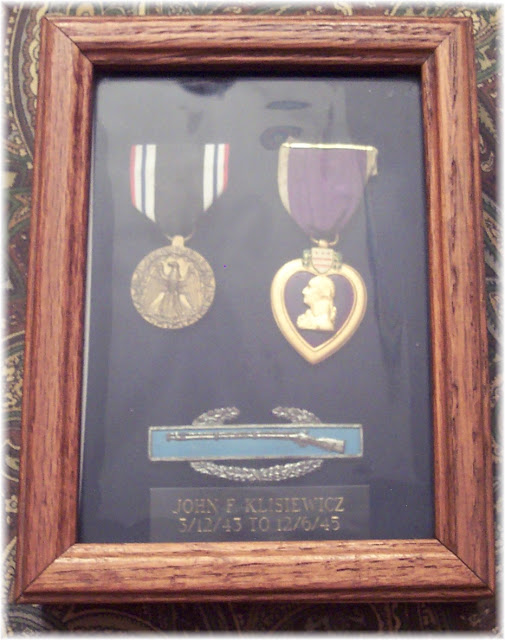